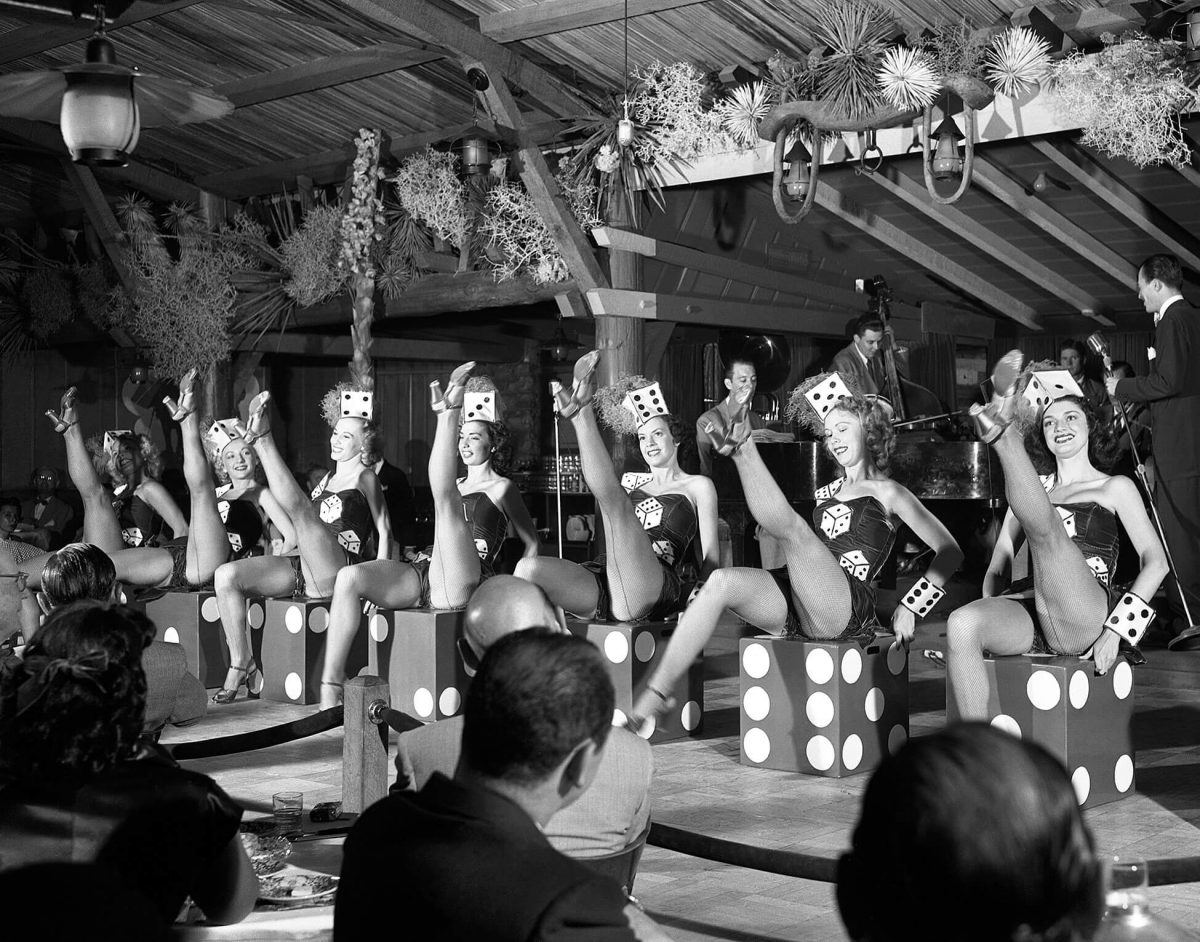 We are fond of Vegas. We said it before, we’ll say it again. As we might have a few issues with the Vegas of today, as we wrote about here, we are in love with the old, classy and elegant Vegas of old black and white photographs.

So we’ll put our hip flasks aside for once and not look at the world through our flask-y lens. We’ll be nostalgic, not cool. We’ll say “those were the days” even though we were never there.

We will, of course, raise our glasses or even better, make a toast with our best liquor flasks to celebrate the city that makes us sorry we were born too late. So here it is, in all its glory, Black and White Las Vegas.

That’s all you need apparently in order to make a Strip pop – black and white; and a few cool American cars don’t hurt as well. Now of course the street was brimming with color when the shutter of the camera captured the scene, but one cannot dispute the fact that the monochrome treatment does the scene justice.

Even though the image is devoid of people, they are there inside the gambling halls and cocktail lounges, smartly dressed and engaged in intellectual conversations.

The Atomic Age Exploding with Colors We know we said “black and white” but we just can’t help it with this 1960’s postcard of the iconic Stardust hotel. Riding on the heels of the American Atomic Age the Stardust hotel took its design cue from the two decades of atomic war fear.

The main logo, parched above the hotel’s entrance, literally plays on the atomic craze with the straight, pink lines ‘exploding’ outward from the core of Stardust. The other Stardust sign, rising high into the sky to catch drivers’ attention from faraway, uses the same bright pink but offers a gentler design, reminiscent of birds flapping their wings, maybe symbolizing a better future to come. Now we’re pushing further back in time, to 1957, when the atomic scare was raging full in America. There’s nothing better to curb fear than a good-looking woman dressed as your source of dread. Say hello to Miss Atomic Bomb.

Nevada was the site for a few atomic blasts during the early 50’s, and the clever move by the state to embrace the fear and horror caused by the experiments took its most anti-scare attire – mushroom cloud bathing suit of cotton candy. It doesn’t get much more innocent than that. We deviate again from our black and white agenda – last time, promise! – but for a very good reason.

This candid photograph, taken at the Circus Circus Hotel and Casino in the late 50’s captured a random moment. Nothing really special in there, just another moment around the green felt table.

The reason we included this image here is to celebrate and admire the dealers’ attire – look at this fancy shirt! Puffed all around with Barbarela-esq bubbles in pastel colors, you don’t see this kind of uniform anymore. Kudos back in time to the Circus Circus fashion designer! This is going further back in time to a different era all together. Still, it seems that all the way back in 1935 Vegas was spinning fast. A mixture of Wild Wild West folks with more dressed-up gentlemen. And it’s this mixture that makes this photograph shine.

It’s incredible to see that this was the everyday attire. Look at the tall guy in the middle and lady on his left. The whole crowd at the far end of the table actually. These are true cow-boys-and-girls. They must have come from the country-side, to have a taste of the city, to take part in the glitzy action on the casino floor.

Come to think about it, nothing really changed in Vegas in the past eighty years or so. I mean people dress differently, they might play more slot machines and video poker than they used to, but the crux of it is still intact, untouched by time – people gamble. Let’s face it – this isn’t the greatest black and white photograph ever taken. But, this is Las Vegas! The city that busted out of a desert in a mega splash of colors, started like this; a few nondescript buildings surrounded by sand.

Since then, for a hundred and some years, whatever happens in Vegas stays in Vegas. It’s a city that has absorbed into itself millions of stories. Nothing was lost, blown with the wind or buried in the sand. It started gritty, turned classy and now it’s, well, sparkly.

We have to end with a boozy note, because that’s the direction the wind blows around here. We think of Las Vegas as one, giant bar. New York might have cooler joints, Warsaw might have stiffer drinks but it is Vegas that gives drinking a good name, especially with a cool hip flask at hand, we almost feel obliged to say.

The best way to drink is when you’re relaxed and if there’s one thing you can say about Vegas, it does calm you down. Or maybe it’s just us. Maybe it’s the mixture of high-octane AC inside the casinos and the hot, desert breeze outside. Either way, when in Vegas, drink like we do.