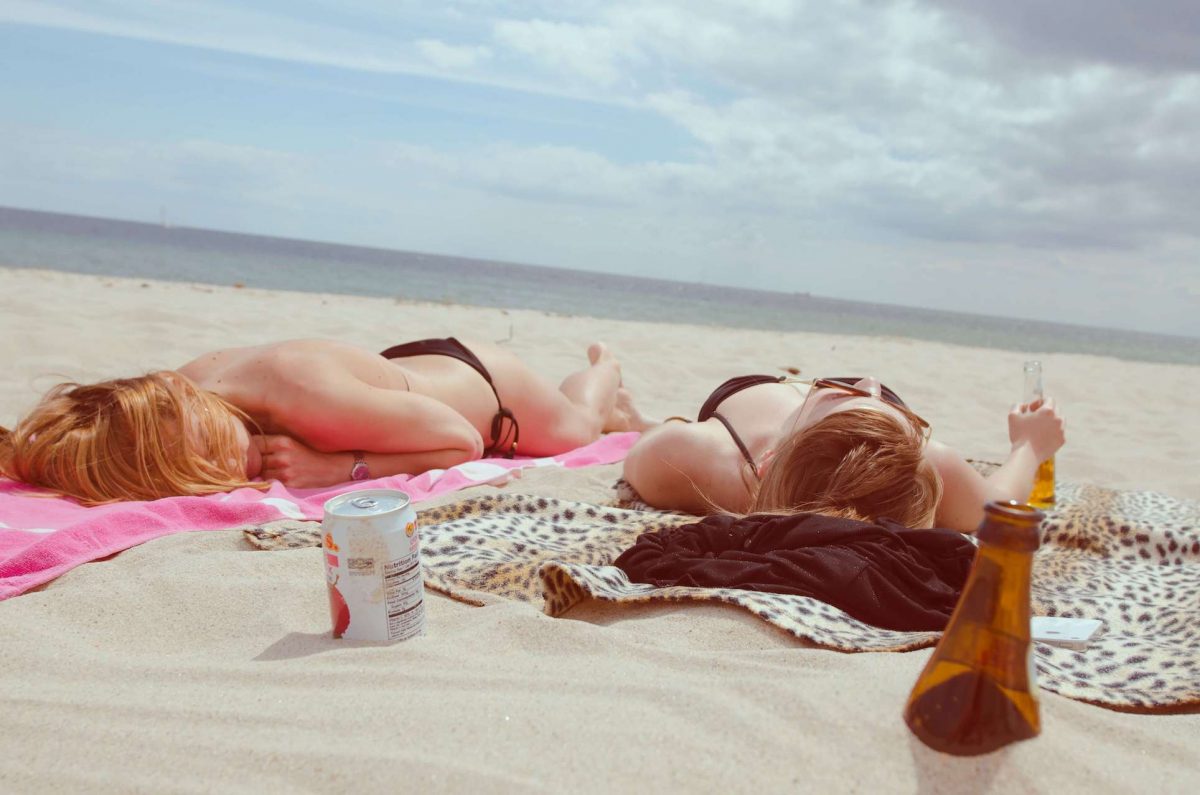 Winter is coming? Please – it’s summer that’s coming. Winter is just something that happens after summer. The only season better than summer time is the drinking season. Unless you live in Japan, where the drinking season is between December and January, let’s focus on what we have to cover: the most responsible guide for summertime drinking on the beach.

We know, it’s a downer- who wants to waste energy on water when they can have a good time with vodka. Yet it’s a life saver. A good rule of thumb would be – for every drink you have, have a glass of water.

On the beach, under the sun we tend to dehydrate faster. The common effect of dehydration is throwing up, and you sure don’t want that while you drink. So refresh with water, party-on after.

Second Guideline: Stay Out of the Water

Speaking of water, let’s talk about the ocean and influence on your boozing.

The combination of these two things is hazardous to those not fully in control over their motor skills, a well-known outcome of alcohol consumption. So while it is very tempting to drink inside the water, you should refrain from it.

Pool floats, tubes, inflatable mattresses and boats, rafts and jet skis are all included in this ban.

Third Guideline: Have a Barrier Between You and the Sun The sun is a beautiful thing, and an incredibly impressive cosmic creation. It is indeed nothing less than miraculous. With that said, it shines as hard as it can during peak times on all living things, plants and things. Too much direct sun will get you baked, and not in that sense (we’ll actually get to that a bit later).

The responsible thing to do is to avoid direct exposure to the sun for extended periods of time. We know that you are very conscious of being stylish, and we don’t want to cramp your style. Simply think of a convenient barrier.

You can wear a wide brim hat like a fedora, yet is it really the right choice for the beach? Any hat would do as long as it covers the top of your head and hopefully casts shade on your face.

You can also take refuge under a beach umbrella. Any color or design will do. You can even take breaks in your car but please – don’t forget to turn on the AC.

Now we are venturing into the really responsible part of the guide (worry not, we’ll take a U-turn with the next guideline). Drinking on an empty stomach has been a heavily discussed topic since the invention of food and alcohol.

Basically there are two schools of thought here: the first says , “hell yes, I wanna feel that buzz” and the second claims, “don’t be an idiot, you’ll feel the buzz anyway”. We’re not going to rule on this – each to his or her own agenda – but while drinking on the beach we are recommending to complement the booze with a few bites here and there.

A good option would be cooling foods that are fitting to eat on the beach: melons (yes, these include watermelons, and cantaloupes), mangos, kiwis, coconuts, citrus fruits, apples and raw cucumbers for instance.

So have a bite of fruit, why don’t you. It’s delicious, refreshing and it’ll allow you to continue drinking.

Thought about mixing your drinks? Go ahead, see if we care. You want to do shots of Grey Goose and then have a glass of pinot? Knock yourself out. This isn’t even about responsibility, it’s about being plain silly. You’ll get nauseous and stupid drunk and you’ll probably miss the best part, in the late afternoon, when a friend shows up all of a sudden with six of her high school girlfriends and you’re face-down on a towel covered with sand and alcohol goo.

So what’s up with this crucial tip? We’re talking about mixing liquor with other stuff. This is without a doubt controversial, and the comments section will just have to bear with us. Bottom line, don’t get carried away and let go of this existential fear of missing out.

If you aren’t sold by now, listen up. When you’re spending time on the beach, it is usually daytime. The sun is shining, which means there’s light. That means that your face is highly visible to others, unlike the flattering darkness of bars.

Have you seen your face when it is stuffed with booze and other substances? Not a pretty sight. So this guide is for the sake of others, protecting them from the unpleasant view of you, demonstrating poor skills in substance management.