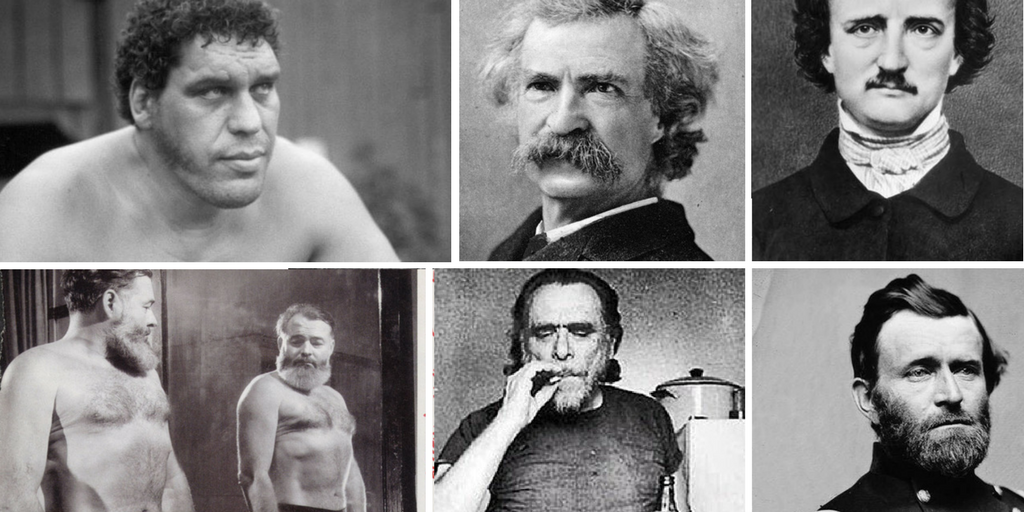 (or at least a mustache, or bushy sideburns)

There are two kinds of men who drank a great deal; the great ones and the awful ones. Obviously, we’ll focus on the great drinkers in history, and from those, the ones that had beards.

Now at first the connection between excessive alcohol consumption and growing facial hair might seem loose, but hear us out. Both activities require perseverance, vigor and tolerance.

Some great, great famous drunks were clean-shaved and some wonderfully bearded gentlemen refrained from getting wonderfully soused; kudos to both groups by the way. Still, we feel that the men who conquered both peaks were truly singular, in their boozy accomplishments and looks.

So without further ado… We know – Ernest Hemingway – the obvious, almost clichéd way to start such a list. The great papa of 20th century American literature, a fearless hunter and one of the legendary drinkers of all time – of red wine. We can’t sing enough praise for the big H, so we’re not gonna even try.

There’s no other way of putting it: Hemingway was a very famous alcoholic. He was also famous for sitting alone at the early evening hours in Havana cafes and downing, all by himself, two bottles of red wine, to get the evening going so to speak. If you’re not impressed, go ahead and try it yourself.

Hemingway sported a full, well-groomed beard. The same care he took of  words and sentences he applied to his beard. It was, without a doubt, an impressive beard. Two more literary giants from the American continent – Edgar Allan Poe and Mark Twain – will need to share a spot due to the fact that they only had a mustache, not an actual beard. While Poe was fine with a tight, thin mustache Twain went all the way with what can only be described as a wild mustache – it literally covered his mouth and had an untamed look.

As for their drinking habits of these two historically famous drunks, Twain made a point of drinking from before breakfast till bed time. He favored bourbon, straight up, but after a visit to Europe he developed a liking to cocktails – bourbon-based of course.

Here is the Mark Twain Cocktail, which he took in the bath:

Don’t let Poe’s fragile appearance mislead you; we are dealing here with a mighty drinker and arguably the biggest absinthe drinker of all time (Sorry Marlin Manson…) Absinthe is a hardcore liquor, probably the hardcore-est, known to incite hallucinations. He drank it on a regular basis, and in generous amounts. His early departure, at the age of 41, didn’t come as a big surprise to his surrounding. And if all you know about Poe is his children tale about a lovely bear named Winnie, then you don’t really know the man; most his writing was mystery and horror.

A Remarkably High Functioning Alcoholic with a Basic Beard A war hero on the one hand, the worst president in US history on the other – say hello to Ulyesses S. Grant, the face, and beard, of the American civil war.

Grant had what can only be described as a practical beard. He had it from a pretty young age and kept it until the end of his life. It was just there, on his face, with no special purpose or intention; an accidental beard one might call it. He probably got smashed straight for a few days and when came out of it with a stubble thought, what the hell, I’ll keep it. And so it stayed, the beard, with Grant.

A drunk solider isn’t a delightful thought; they do carry a weapon after all, and Grant was the most famous drunk soldier in history. Back then it was clear – a hip flask for men of war is as trusty as a rifle. Grant was skilled with his rifle and with the bottle,  because this drunk advanced to become a general. With a bottle in his hand he led the Union to a decisive, historical victory over the Confederacy.

A Brilliant Alcoholic with an Accidental Beard Charles Bukowski was a genre of literature and poetry all to himself. A ferocious, unapologetic writer and drinker, Bukowski stumbled through life with a beer can in hand, bouncing into everything that was in his path.

Bukowski had a beard. That’s all we can say about his facial hair. It was indistinct, at times even seemed unaware of itself.

As for his drinking habits, they were as wild, authentic and atypical as his writing. Beer was always by his side, but he didn’t pass on any other type of alcohol that came his way; whether wine or hard liquor, Bukowski  – we should say it again, one of the most brilliant alcoholics – gulped it down with vigor again, the exact same way he put his words together:

“Drinking is an emotional thing. It joggles you out of the standardism of everyday life, out of everything being the same. It yanks you out of your body and your mind and throws you against the wall. I have the feeling that drinking is a form of suicide where you’re allowed to return to life and begin all over the next day. It’s like killing yourself, and then you’re reborn. I guess I’ve lived about ten or fifteen thousand lives now.”

The Biggest Alcoholic of All Time with Giant Sideburns We really wanted to have Andre the Giant on this list, because no alcohol-related list is really completed without Andre in it. That’s why we allowed his prominent sideburns to take the place of a beard.

The Giant was truly one of the most tenacious drinkers of all time. His capacity for alcohol was no less than legendary and he is considered as the most tolerate person in history to alcohol. Andre’s drinking stories have gained notoriety, here’s two of our favorite ones:

This story told by no other than Hulk Hogan. While the two were on a tour in Japan, Andre drank 12 bottles of white Pouilly-Fuissé during a three-hour bus ride.

When got a ‘last call’ call from a bartender in a Kansas City watering hall, Andre ordered 40 vodka tonics. He proceeded to drinking them, one by one, until about five in the morning.

We miss you Andre!

A Toast to the Black and White Glory of Las Vegas